Frank Johnson, a member of the Australian football hall of fame, has died at age 84

A champion ruckman who crossed the bridge from association to league football with ease late in his career, Johnson died yesterday at the age of 84.

In 2007 he was the first (and remains the only) VFA player to be inducted to the Australian football hame of fame.

Johnson was at Port from 1950-57, winning five best and fairests and the 1952 JJ Liston Trophy, playing in eight consecutive grand finals and the 1953 premiership team, and gaining selection in the 1953 and ‘56 All Australian sides.

Frank Johnson marking in the 1952 VFA grand final against Oakleigh.
Johnson then coached South Warrnambool in 1958-59 and the following year joined South Melbourne, which had coveted his signature for some years.

In his first season as a Swan he won the best and fairest at age 27, edging out Bobby Skilton. He stayed with South until 1964, notching 64 games. VFL stand-alone clubs Coburg and Port Melbourne have proven they are finals' material after resolute victories on Saturday.

To the contrary of most football pundits who believed that AFL stand-alone clubs would dominate against teams made up of part-time footballers, the Lions and Borough knocked off Footscray and Essendon respectively – in another major step forward for the competition.

Coburg are in the mix to make their first finals series, since splitting with former AFL affiliate Richmond, while Port Melbourne are pushing for the top four. Of course, reigning premier Williamstown are in second position, again flexing their muscle under coach Andy Collins.

The Seagulls and Borough have both won VFL flags over the past six seasons as stand-alone VFL clubs. Coburg's rise – along with some competitive rigour and drive from Frankston and North Ballarat (albeit being on the bottom of the ladder) – has the competition in a healthy state.

Doctors have been shocked by the survival of a young footballer who contracted a rare and deadly muscle-attacking bacteria.

A Victorian man is one of just seven people who have survived a rare superbug that’s believed to have struck only 21 people in the world.

Sam O’Sullivan not only defied those odds, but it’s also believed he is the only survivor to have escaped losing a limb after being infected with necrotising myositis – a fast-spreading infection that attacks the body’s muscles.

Mr O'Sullivan said he had flu-like symptoms for about a week, which culminated in being hospitalised for severe shin pain.

“They couldn’t really find out what was going on for another couple of days,” he told 3AW radio.

“My leg blew up and my foot stopped working. I lost sensation.”

He went into surgery for compartment syndrome, but it wasn’t until doctors had made an incision that they realised what they were dealing with.

“They opened my leg up and got the shock of their lives.”

Roughead, Roberts to return via VFL 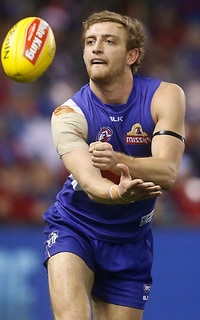 Key defenders Fletcher Roberts and Jordan Roughead will make their return from injury with Footscray on Saturday, named in the extended squad for the VFL side's Round 18 match at Victoria University Whitten Oval.

Roughead has missed the last three weeks with a foot injury, while Roberts has been sidelined since injury his ankle in the Club's Round 15 win over the Gold Coast Suns in Cairns.

The defensive pair will add significant experience to the Footscray back-six, and have been named to occupy key-posts in defence along with father-son defender Zaine Cordy.

The fourth placed Footscray (10-5) side take on Port Melbourne (6-9), with the standalone VFL side currently sitting just outside the top-eight in ninth position.

A win for Footscray could boost their claims for a top-two place on the VFL ladder, sitting one game behind Wiliamstown and Sandringham.

Footscray have named a squad that will feature 18 AFL-listed players. Father-son prospect Darcy Macpherson has again been named as the 23rd man.

After this weekend, just two rounds remain in the VFL home and away season, before finals beckon, commencing in the first weekend of September.

Saturday's Round 18 VFL between Footscray and Port Melbourne will be broadcast live on Channel 7, with coverage commencing from 12:00pm.

Footscray will take on the ninth-placed Port Melbourne in what is a must-win match to keep the Borough’s final chances alive.

Bulldogs coach Ashley Hansen said that he expected a tough match with Port Melbourne fighting for a finals spot.

“We are expecting nothing less than the Port Melbourne Football Club we have known for the past decade.

“A really proud club with experienced players will always respond to the opportunity to stay in touch with the finals so we will be prepared for that.”

The Bulldogs welcome back senior vice-captain Jordan Roughead who has missed the last three weeks with a foot complaint.

Fletcher Roberts also returns from injury after a four-week layoff and both are expected to take on key defensive roles.

“For both Jordan and Fletcher our main aim for the weekend is to return to playing football and gain significant match fitness and game sense after being out with their respective injuries,” Hansen said.

“Both are valued members of the squad so tomorrow is an important step in their rehab and return for AFL selection in the coming weeks.”

Footscray posted a big result last weekend against the top ranked Williamstown, and Hansen said it’s important for his side to maintain that form and carry momentum.

“The focus each week for our players is to continue to build their games around the role they are assigned and collectively performing as one unit.

“The strength of our team is determined by our actions for one another so that mentality is really important that we sustain after last week.”