THERE were no injuries and plenty of promise as Port Melbourne got through its first VFL practice match against North Ballarat unscathed.

A dominant third quarter set up the win, but coach Gary Ayres admitted there was "about a five-goal breeze".

Key senior players including captain John Baird, Sam Pleming, Chris Cain and Toby Pinwill did not play but should line up against Frankston in another practice match on Saturday.

The next edition of Borough TV is online...
https://www.youtube.com/watch?v=O3rB4-yapok

THE sight of Steve Brewer taking the ball at half back and giving it a mighty hoof with his left boot has delighted Port Melbourne supporters for six seasons.

Few players kicked it longer or stronger. There were days when you suspected he needed the all-clear from Tullamarine to launch his drop punts from the North Port Oval.

But Brewer has closed his worthy VFL career, heading to Greenvale in the Essendon District league.

"Their (Greenvale's) ground is 500m from the school I teach at,'' Brewer said this morning.

"They have been in contact with me for the last couple of years and I knew I'd go there at some stage, when I felt the time was right to leave the VFL. The time's right now.''

Port coach Gary Ayres said the 2011 premiership player made an important contribution to the Borough and could be proud of his achievements. He called him a "thorough professional''.

Brewer bounced around the VFL before consolidating a senior position at the Borough.

He fiddled away in the reserves at Box Hill for two seasons, gained senior opportunities at Casey Scorpions, then had a year at Williamstown.

SAM Dwyer has known the deep disappointment of being overlooked in a succession of AFL drafts.

So the Port Melbourne ace chose not to follow this morning's rookie selections.

He figured he would soon find out one way or another.

It came in the form of a phone call from Borough coach Gary Ayres.

He was bearing good news: Collingwood had taken the 26-year-old, granting him his long-held ambition to make an AFL list.

"Bit surprised. I didn't watch it or listen or anything like that," Dwyer said.

"I've just stayed at work (he is an electrician with Port team manager Steve Carr). 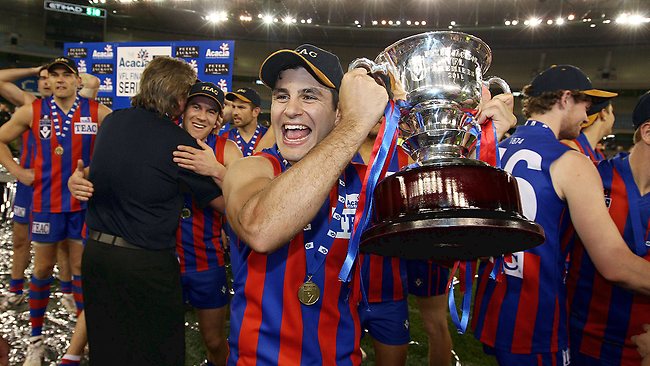 The 24-year-old is returning to Melbourne after a successful season with Norwood in the SANFL.|

Batsanis figured in the Redlegs' flag and finished fourth in the Magarey Medal after going in as favourite.

With his speed and long kicking, the right-footer was an integral part of Port's perfect 2011.

"Just missed home too much, family and friends,'' Batsanis said this afternoon.

"Need to be back in Melbourne, where I belong.