Lachie Fogarty in action against Port Melbourne in round 18.

The Cats finished sixth on the ladder at the conclusion of the regular season. 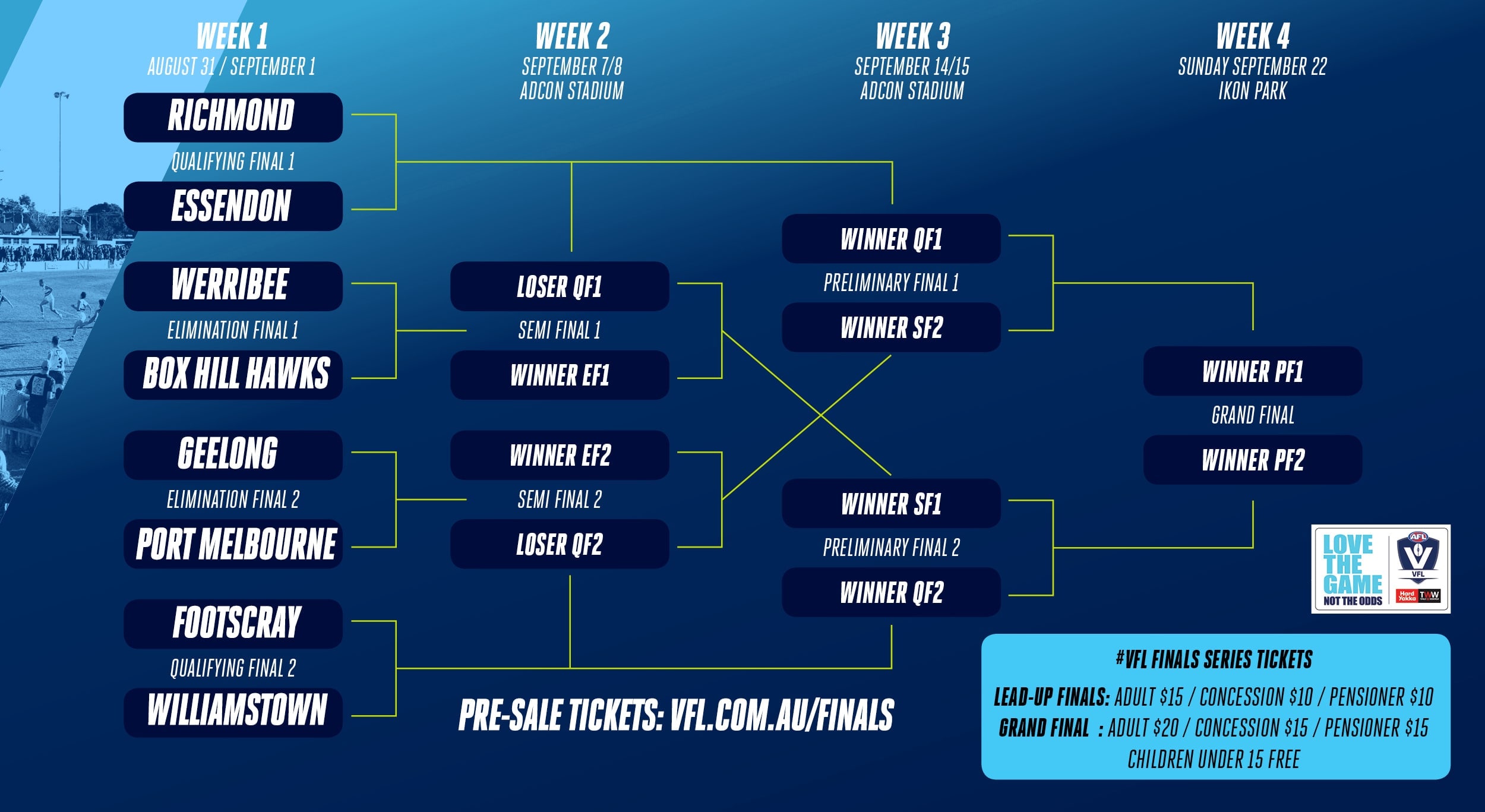 They will enter the finals full of confidence after a dominant 41-point victory against fourth placed Essendon.

The Cats have now won five of their past six matches, which included a 23-point win against the Borough in round 18.

The first ball will be bounced at 2.10pm, with the VFL women’s elimination final between Geelong and Melbourne Uni to take place prior from 11.45am.

VFL CATS AWAY AS THE HOME TEAM GEELONG coach Shane O’Bree wasn’t interested in buying into the debate over home ground advantage after his side was locked in to take on Port Melbourne in a VFL elimination final this Saturday.

The Cats (sixth) finished higher on the ladder than the Borough (seventh), but have been scheduled to play their match at Port’s Adcon Stadium.

A double-header will see Geelong’s VFLW side take on Melbourne Uni in an elimination final curtain-raiser.

The VFL announced in early August that Adcon Stadium would host the elimination finals and O’Bree laughed off the quirk of the Cats being sent to play at their lower-ranked opponents’ home ground.

“That’s fine. As long as we get the home rooms, that’s all I’m worried about now,” he said after the Cats’ comfortable 41-point win over Essendon yesterday.

CATS: JJ KEEN TO REMAIN IN THE HOOPS

Geelong beat Port Melbourne at Adcon Stadium by 23 points in round 18, and O’Bree said the Cats would take confidence out of what he felt was one of their better performances of the season.

Confirmation of the VFL elimination final schedule follows the ongoing debate over Geelong being denied the right to play AFL home finals at GMHBA Stadium.

The Cats’ senior side clinched the minor premiership but will meet Collingwood (fourth) at the MCG – the Magpies’ home ground – in a qualifying final on September 6.

Port will need to run and carry, tackle hard and give Geelong no space. If port can do that they can win. Will need more of a 4 quarter effort and pressure from start to finish. I think the borough can do it. Have not looked at the odds for the weekend but at a guess the favourites I would say would be Geelong around $1.50, Richmond $1.30, Footscray $1.80 and werribee $1.80. Any odds out bearsman ?

No odds on the games until Friday probably - premiership market available now..

There is a site VFL results and Historical odds that you can go back over the last few years with all the results and starting odds for each game. I can send the link later tonight. Do you think the odds are about right ?
Any teams that you think are under the odds and which team looks over the odds for the premiership hunt?

I would say Frankston's win over Richmond several years ago at $17 would be the biggest price winner. Those odds would have been even bigger at quarter time if there was live betting.

I cant see any holes in the flag market. Looks about right to me. Richmond clearly the best team and deserve to be short odds. Willy capable of beating them if they play their best and catch fire in the finals, except for Footscray the others dont seem to be good enough this year.

Ive had a good bet on Werribee for the flag at $41 early in the year and hoping for the best, but thinking next year might be their year.

Going to be very, very tough for Port. Geelong are going to bomb it into their forward line which with our lack of really tall backmen will have trouble defending. Having said that, I have been wrong in the past and hope I am wrong this time as well.

Not much between Port and Geelong Mega. Might come down to who wants to win more and Id rather be on Port than the Pussies when it comes to the crunch with backs against the wall. Having said that they need more return from some of their bigger names - Lisle, Haretuku, D.Conway.

Port will need to carry the ball and try to win at ground level. Also they have to tackle hard and give the cats lack of space. Geelong would rely on the big marking taller players and kicking the ball long. Interesting game but Port can definitely win. The borough can study the game by Williamstown two weeks ago when they beat Geelong. Wylie Buzza must be watched closely as well by Port defenders. Prediction Port by 10 points.

I'm appalled with all this talk of betting odds etc, don't you blokes realise the VFL finals are sponsored by Love the game not the odds or something similar.
PS,dont forget to gamble responsibly!

Going to be really tough Mega, Especially with a four goals start & coming out of the visitors rooms !