VFL Tigers eye a spot in the Grand Final Richmond VFL will fight for a spot in the Grand Final on Saturday, when they square off against Port Melbourne in a preliminary final at Adcon Stadium.

The Tigers, fresh from a week off, have the task of knocking off a rampaging Port Melbourne at the Borough's home fortress.

It’s been a long time between drinks for the two sides that met all the way back in Round 2, with the Tigers prevailing by 43 points.

Given it will be over five months between outings, not much can be taken out of their most recent encounter. But the Borough have some shining traits that Richmond will have to curtail to secure the win.

Richmond VFL coach and recently awarded VFL Coach of the Year, Craig McRae, is aware the result will hinge on who handles the heat at the coalface.

“We haven’t played them for a while…Round 2, so it’s hard to get a read on how they play. We’ll sit down and have a look at that on the tape and see what we’ll see but their contest and pressure has been something that’s been a real feature”, McRae said.

“You look at the last two or three weeks stats-wise and those things stood out."

McRae was quick to acknowledge the honour he recieved at the VFL Best and Fairest night, alongside Hugh Beasley and defensive partner-in-crime Dan Coffield, who were granted back-half posts in the VFL Team of the Year.

“It’s great reward for those guys and I mentioned at training that individual awards are only achieved through great team success”, McRae said.

“The team performs well and the individuals get better and this case ‘Beaser’, myself and ‘Coff’ are the ones recognised. But we’re not naïve to think that we’re not in those positions without the contributions that have taken place throughout the year.

“While we’re grateful, we appreciate all of the other stuff that goes with it." The potential for a one-on-one duel between 2019 ‘Frosty’ Miller medallist for the VFL's leading goalkicker, Port Melbourne's Jordan Lisle, and VFL Team of the Year full-back, Hugh Beasley, adds a vail of intrigue to this cut-throat final.

Richmond’s mantra, however, is not centred around individual matchups, rather, a collective pursuit to curtail the opposition’s strengths and be hard to play against.

However, McRae will no doubt have a contingency plan for if the Port Melbourne spearhead catches fire.

“We’ll have some options but he’s certainly a player that we’ll have to watch—he’s a quality player at this level”, McRae said.

On the road to the preliminary final, Richmond pulled off one of the greatest comebacks in VFL history, clawing their way back from a 40-point deficit at three-quarter time to defeat the Bombers by two points in the qualifying final.

“Upon reflection, our balance around the contest was reasonably poor, so we’re looking at that and ways we can improve. But ultimately, the greatest lesson we took out of the game was the belief we have in this group”, McRae said.

"So, we go into (Saturday's) game and our opposition can’t take our belief away from us...we’ve built that over a number of weeks." Toby Nankervis was the hero in Richmond’s come-from-behind win. However, with Nankervis returning to AFL duties, the rucking responsibility will likely be passed to able lieutenants, Callum Coleman-Jones, Mabior Chol and possibly Noah Balta.

This will not be uncharted waters for the Tigers, with all three having handled the workload during the season.

“We’ve juggled that ruck position all year with (Ivan) Soldo, 'CJ' (who has) had to carry the load for a major part of the year and then ‘Marbs’ did it for little stints as well,” McRae said.

“We’ve got good flexibility in our team and ‘Nank’ goes out but he only played 60 per cent of the (qualifying final) game. It was a pretty special 60 per cent, particularly in the last quarter. Even ‘Garthy’ (Ryan Garthwaite) played some minutes in the ruck...so I think we’ve got good scope in that part of the game."

Chol, Balta and Coleman-Jones have all had stints at AFL level this season and have a shown growth in their development.

McRae is bullish about what his young ruckman is shaping into.

“He’s been a real standout in terms of development,” McRae said.

“The two-year growth for him has been profound. We had a really targeted program for him last year that he grew within, and this year he looks like he’s gone to a whole new level.

“I think he’s a really exciting prospect. His ground level stuff and his contest-to-contest stuff is as good as any I’ve seen at this level for a young, developing ruckman and we’ve got high hopes for him."

Saturday’s preliminary final will be the Tigers second in three years. Richmond fell agonisingly short of premiership glory against the Borough in 2017.

McRae points to the differences he’s felt between the two finals series.

“It’s all a new experience for us and every campaign’s different, the build-up’s different…but I think this group right from the start of the year looked hungry”, McRae said.

“In 2017 we got a bit of a run-on late and had a lot of experience that drove that and we had the whole footy club that was abuzz amongst that.

“This group, right from the practice games, have this hunger and want to win and an ability to connect really well, so those things in particular are a main reason why we’re in the position we are at the moment."

On Saturday, as its been all year, this group will be hungry, connected and will look ‘Richmond’. 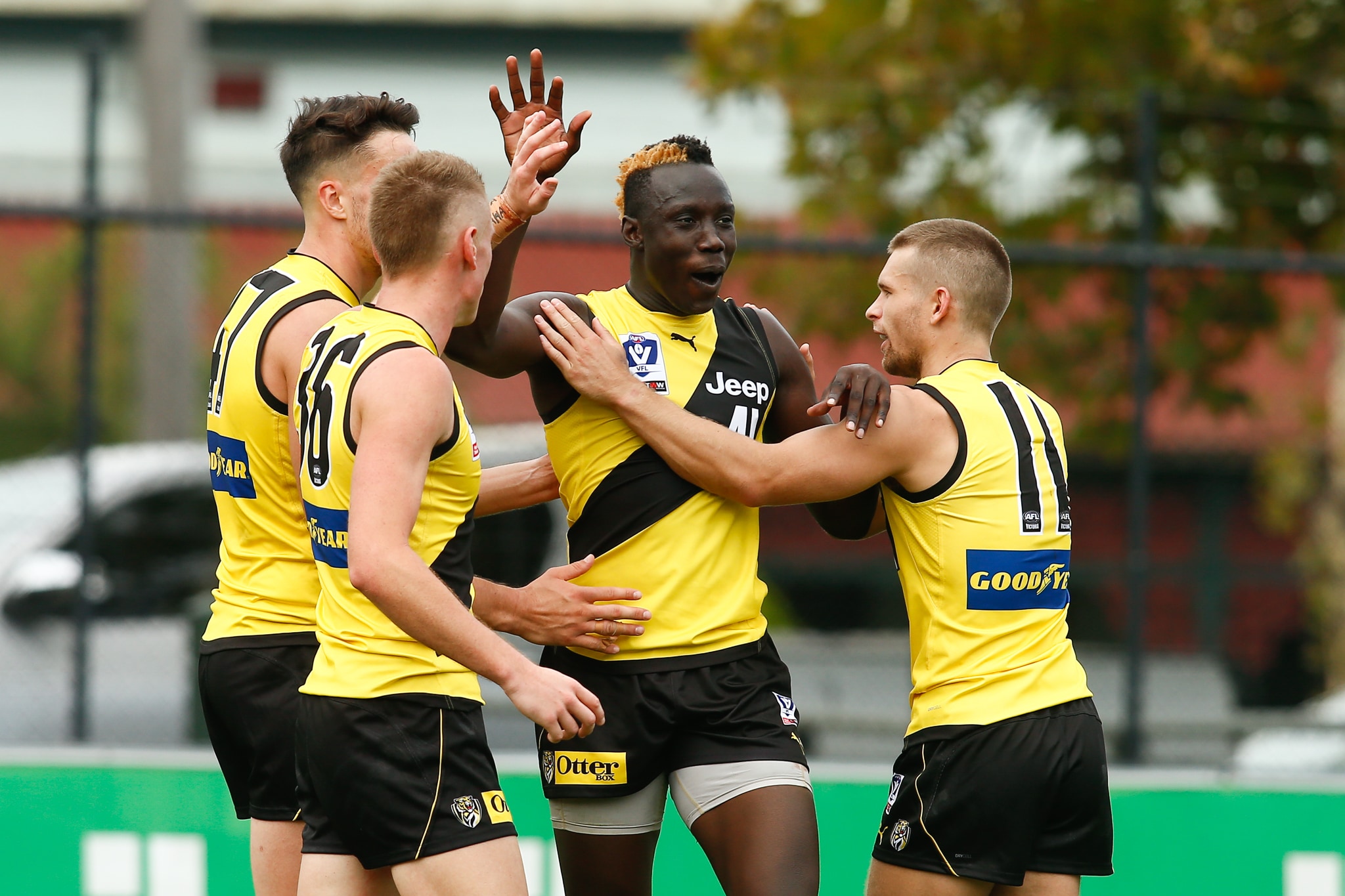 Tickets to the game are available here. Those unable to make it to the clash can watch it live on Channel 7 from 2.00pm.

Richmond's preliminary final team will be announced at 7pm tonight, updated in this article. 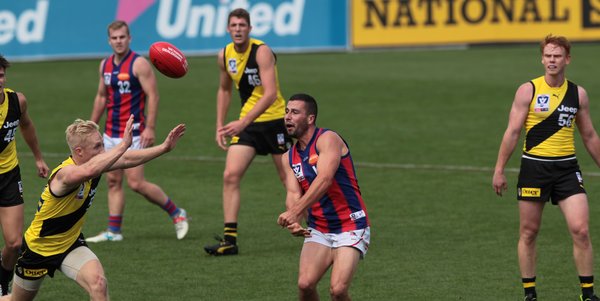 After two gruelling victories across the first two weeks of the VFL Finals Series, Port Melbourne have defied their 7th-placed finishing position to have now incredibly won through to a Preliminary Final this Saturday against Richmond at Adcon Stadium.

It’s fair to say that there is no bigger test in football at any level right now than taking on the Tigers.

But if the Borough’s last two performances are anything to go by, then they will certainly acquit themselves well at the very least.

After an outstanding team performance saw them get the better of Geelong, last weekend’s victory against the Bulldogs was a different style of win.

In tricky conditions, Port Melbourne had to brave wind and even rain at times to grind out a 15-point win in a low-scoring affair.

Despite conceding 23 more inside 50’s and 5 more scoring shots on the day, the Borough were able to make the most of their own forward entries to hold off a late fightback by the Dogs after jumping out to an early lead.

Such efficiency will prove pivotal again against the Tigers, who have been absolutely far and away the best team all season at VFL level.

They won through to the Preliminary Final without the need to play last weekend following a monumental comeback victory over Essendon at Punt Road Oval in the Qualifying Final.

Since then, Richmond’s AFL side have also earnt the right to a week’s rest and a subsequent Preliminary Final next weekend.

What it means is that for a third successive week, the Borough are likely to face up against an opposition with a significant influx of AFL-listed personnel.

Like their AFL counterparts, Richmond like to play a ‘surge’ style of football; and pride themselves on setting up well behind the ball and damaging opposition turnovers when the chance presents.

Since the famous 2017 VFL Grand Final, the two clubs have only met on two occasions – in Round 1 (2018) and Round 2 (2019 – pictured); both at Punt Road Oval and both in which the Tigers have comfortably had the Borough’s measure.

In addition, Richmond have only lost two games across the entirety of the current season, and basically all of that logic would suggest a win through to the Grand Final at IKON Park on Sunday week.

But as has already been proven, Gary Ayres and this Port Melbourne side loves challenging logic.

After an up-and-down home-and-away season, the form and overall health of the playing list has essentially spiked right at the perfect time of the season.

Several of the boys in red and blue will be entering this game chock-full of confidence, none more so than the four stars who were this week recognised for their efforts this season in being named as part of the VFL Team of the Year: Eli Templeton, Shannen Lange, Harvey Hooper and ‘Frosty’ Miller Medallist Jordan Lisle.

Jarryd Blair is also in blue-chip form. After his three successive ‘best on ground’ efforts against Frankston (Round 19), Sandringham (Round 20) and Geelong (Elimination Final), his 13 disposals against the Dogs was down on those recent games; but his game-high effort of 9 tackles said so much for setting the tone in and around the contests last Saturday.

If the Borough can once again bring belief, spirit and a tactically sound game plan, they will give themselves every chance of winning through to a 34th VFA/VFL Grand Final.

With fine weather forecast and no AFL games taking place in Melbourne this Saturday, this promises to be a terrific contest in front of a bumper Adcon Stadium crowd.

Patrons wishing to come along are strongly encouraged to pre-purchase their tickets to the game via the VFL website HERE.

The bounce of the ball is set to take place at 2:10pm, with live TV coverage of the game also provided by Channel 7.

What a strong list for Port Melbourne to choose from. No excuses on Saturday!

A good start is vital for the borough. Will need to lift another cog but with a grand final spot up for grabs and playing at north port oval they will go in with a good chance. Been impressive in both finals to date and will have a fair bit of confidence. Port v Willy gf love to see that. Bring it on. Sweet VFA

Richmond by 5 goals at least.They have half an AFL list playing many of whom could still make the senior side!

If there is a good crowd at North Port it will be due to the Tiger Army turning up!Same for Sundays Prelim it will need the Essendon fans to show up for a good crowd.

I have pre paid my tickets for both games. Should be ok crowds for both days. Saturday will draw slightly more. Ports best chance as tough as it looks will be if they can get a jump on Richmond early and put pressure on them. Need to deprive the tigers of space. Richmond's odds will be $1 40 maybe even $1.33. Williamstown will be favoured to beat Essendon. The seagulls will break their preliminary final jinx and can go all the way. Princes park and whoever they play won't hinder the seagulls if they make it to the gf.

Hey VFA (or anybody else) - with the pre purchased tickets does it go to your phone or do you have to print it out ?

Both either phone or print out. I have printed mine out as easier.

I just use my phone.