The 2020 VFL Fixture has now been released by the AFL.

Refer to the below image for a rundown of what the Borough’s season will look like! 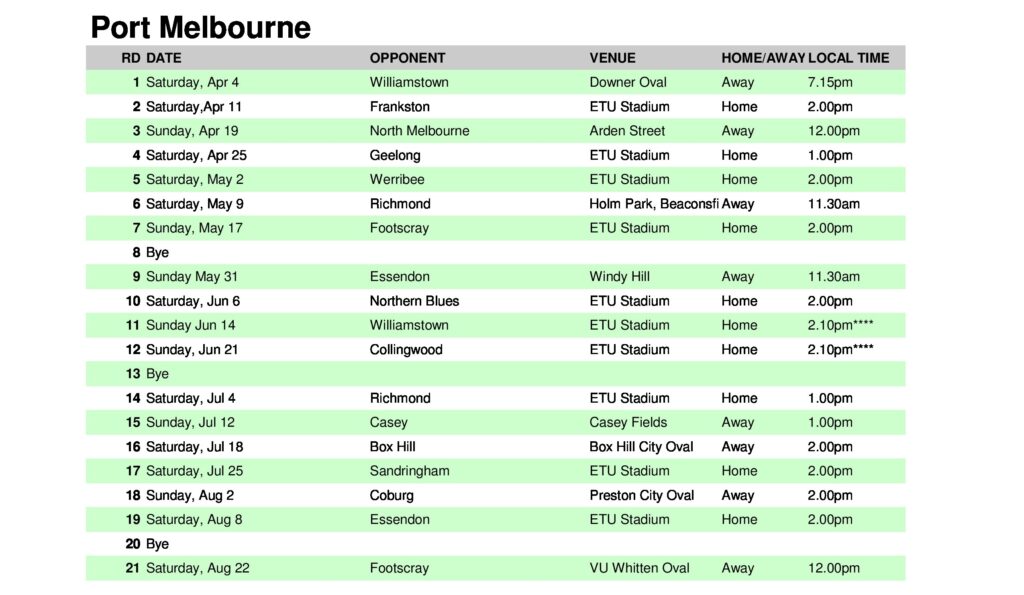 Some of the key points to take out of the Fixture release are as follows:

– The season is spread across 21 rounds, with each side to partake in three Byes during the course of the year for a total of 18 games played.

– The Borough will once again enjoy the luxury of an ‘extra’ home game at ETU Stadium in 2020 for a total of 10.

– The season will officially commence with yet another historic clash against our oldest and fiercest rivals Williamstown under lights on Saturday 4th April at Downer Oval Point Gellibrand; to once again face off for the ‘Johnson-Callahan Cup’, in honour of the two respective past legends from each Club, Frank Johnson and Gerry Callahan.

– The four sides that we play twice during the year are Richmond, Essendon, Footscray and Williamstown.

– The first home game at the newly-named ETU Stadium will take place in Round 2 against fellow standalone Club Frankston. It will also mark the Borough’s newly-recruited ruckman Mitch McCarthy’s first clash against his former side.

– For the first time in their short history within the VFL competition, North Melbourne will host the Borough for Premiership points at Arden Street in Round 3 on Sunday April 19th. In addition, an early-morning road trip awaits the Port Melbourne faithful to take on Richmond at Holm Park in Beaconsfield in Round 6 on Saturday May 9th at the earlier-than-usual starting time of 11:30am.

– With ANZAC Day (25th April) falling on a Saturday in 2020, the Borough have been locked in to clash with Geelong at ETU Stadium at the earlier starting time of 1:00pm. With the traditional Essendon vs. Collingwood AFL blockbuster confirmed for a twilight start in season 2020, the earlier start time will allow sufficient opportunity for attendees to enjoy what should be two terrific games of football in their entirety.

– Two Channel 7 TV games for the Club have so far been locked in: round 11 on Sunday 14th June when the Borough clashes with Williamstown at ETU Stadium in the club’s annual ‘Frank Johnson Heritage Day’; as well as another home game the following Sunday in round 12 against Collingwood on 21st June. There will be a further announcement of broadcasted games in the second half of the season once the footy officially gets underway.

– As part of the fourth annual ‘Frank Johnson Tribute Day’ that will take place in Round 11 at home against Williamstown, the player adjudged to be the best afield on the day will once again be awarded the Frank Johnson Tribute Medal. This clash will also mark the fourth of the Clubs’ playing off for the aforementioned ‘Johnson-Callahan Cup’.

All in all, the Club is pleased with the balance of our fixture and look forward to sharing in the excitement of season 2020 with all of our loyal fans. Bring on April!

Click on the below link to download a copy of the Port Melbourne season 2020 Fixture (PDF format):

The Club are also in the process of finalising our schedule of practice matches ahead of the 2020 season proper, which will be confirmed over the coming weeks.