ANOTHER young star will shine bright when the VFL announces the winner of the prestigious Fothergill-Round-Mitchell Medal on Thursday night.

The medal, which honours Des Fothergill, Barry Round and Sam Mitchell, the three men to have won the J.J. Liston Trophy-Brownlow Medal double, is awarded for the VFL’s most promising talent under the age of 24 at the start of the season.

While there is no Liston Medal this season due to the uneven number of games played by each club, all other awards will be presented on a special video stream of the VFLW’s Lambert-Pearce Medal announcement hosted by Nigel Carmody and Nat Edwards on vfl.com.au from 7pm.

The past 14 winners of the Fothergill-Round-Mitchell Medal have gone on to be drafted to the AFL, with 2017 winner Bayley Fritsch kicking six goals for Melbourne in last week’s AFL Grand Final and Michael Hibberd also starring for the Demons – and there is a crack field assembled dreaming of being No.15.

The nominees are headed by Williamstown key defender Charlie Dean, who enjoyed an outstanding first season averaging 7.3 marks and 14.8 disposals per game and scoring an invite to the NAB AFL Draft Combine, and Werribee full-forward Hudson Garoni, who averaged 6.7 marks and kicked 17.17 including hauls of 5.2, 4.2 and 3.6 as he aims to follow Ben Brown, Josh Corbett and Jake Riccardi as Tigers’ spearheads to have been drafted.

Port Melbourne’s Harvey Hooper, Southport’s Kwabe Boakye and Carlton’s Stefan Radovanovic are also in contention, while Giant James Peatling found his way onto GWS’s senior list in the mid-season draft and would automatically lift the draftees’ record to 15 in a row.

The VFL Team and Coach of the Year will also be named on Thursday night, as will the Alex Gillon Award for Volunteer of the Year and the Jim “Frosty” Miller Medal for leading goalkicker, while two new life members will also be inducted.

The headline act of the night is the Lambert-Pearce Medal, which honours women’s football pioneer Helen Lambert, who died in August, and the competition’s greatest player in seven-time winner Daisy Pearce.

There are plenty of contenders to join Darebin stars Pearce, Katie Brennan and Lauren Pearce and Williamstown’s Jess Duffin as the fifth winner of the VFLW award and add their name to a VWFL honour roll that includes the great Debbie Lee, Shannon McFerran and Sharon Bonnici.

The Debbie Lee Medal for the most promising young player, the Rohenna Young Medal for leading goalkicker, the Team and Coach of the Year and the Ann Rulton Award for Volunteer of the Year will also be presented.

The VFL/VFLW Awards Ceremony, featuring the Lambert-Pearce Medal for the VFLW best-and-fairest, will be streamed on vfl.com.au from 7pm on Thursday, October 7. 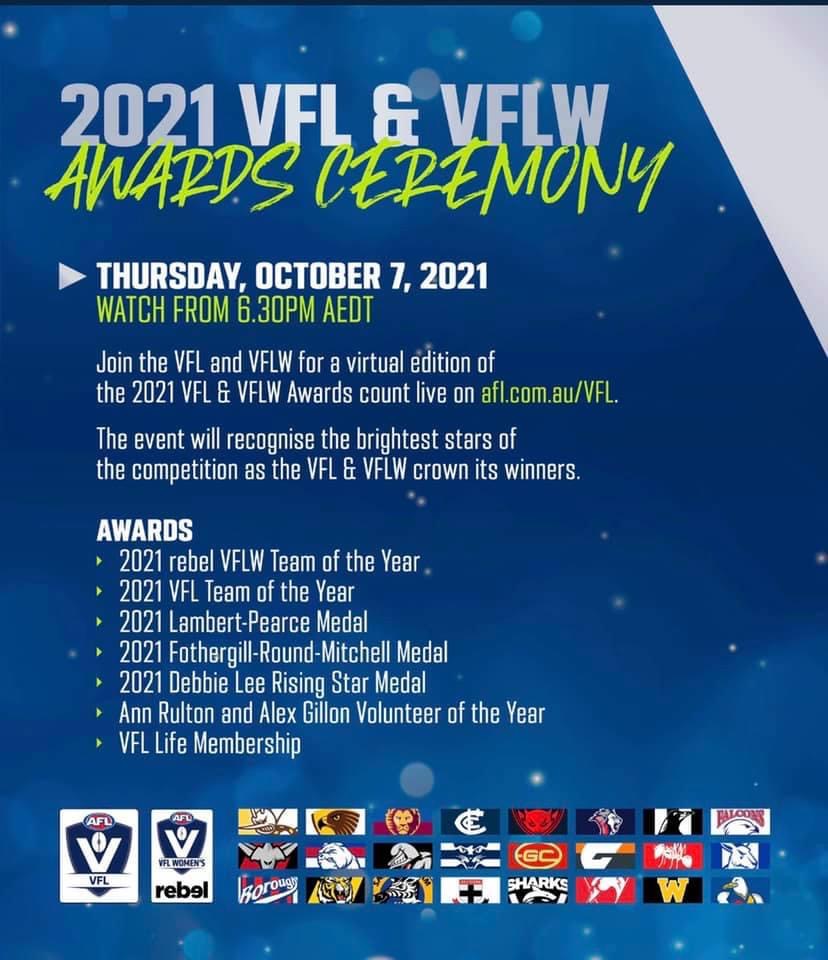 Looking forward to seeing the team of the year.  Got to be a bloody difficult task given the number of clubs and just how disjointed the season was.