Below is an extract from Fox Footy

UNDER-THE-RADAR RESERVES ISSUE HAS ‘GROWN SIGNIFICANTLY’
North Melbourne coach David Noble has warned the gap between AFL and VFL levels has “grown significantly”, making it harder to prepare players for the top level.
The 21-team VFL, which now covers the entire east coast, sees Melbourne as the only unbeaten side (just like at AFL level). Six clubs have a percentage of 134 or better.
At the bottom however, two teams are winless - Essendon’s VFL side and stand-alone club Williamstown - with five clubs having a percentage of 76 or less.
Part of the issue may be having full-time players on AFL lists against part-timers.
As local footy writer Paul Amy tweeted on Sunday evening: “The six Vic VFL stand-alone clubs (Williamstown, Coburg, Northern Bullants, Port Melbourne, Werribee and Frankston) have between them played 30 matches this season - and won seven.
“Some officials think the gap between them and the AFL and aligned teams has widened this year. Let’s hope they can all climb the ladder quickly. We need them strong.d: I'll have to buy him a beer! | 01:04
On Saturday night when asked about the form of young tall Callum Coleman-Jones, who has spent much of his first season at North Melbourne in the state league, Noble suggested the gap between it and the AFL was becoming a bigger problem.
“The step between the AFL and the VFL now has grown. It’s grown significantly,” Noble said in his post-match press conference.
“His second half was probably not too bad, he just needs to get more time under his belt at AFL level because of the speed and intensity of the game.”
Asked a follow-up question on the same topic, Noble conceded: “It’s a bit (of a concern).
“The problem is, particularly for those younger guys, to get the games into them to make sure they’re absolutely ready to go.
“Example, I think Paul Curtis was again better tonight because he actually had the tempo and the understanding from last week, which we know you don’t get until you expose those guys. We talk about playing at AFL speed, sometimes that’s quite hard to do at VFL level.
“The ball’s not as reliable, it doesn’t get delivered as well, the systems are bit slower, the execution’s a bit more off. Trying to get our guys to play with a higher intensity and urgency at a VFL level is tricky, it’s really tricky.”
He added: “At the moment it’s just where the competition is. We’re almost national in the VFL, we took a bunch of top-ups with our AFL guys up to Brisbane a couple of weeks ago, Brisbane had a pretty strong list and we got a bit of a touch-up.
“It’s what it is, you just have to make it work.”

Link to the full show
https://www.foxsports.com.au/afl/afl-news-2022-round-7-talking-points-an... 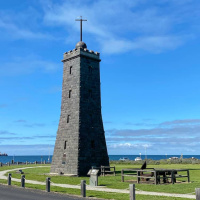 Noble is quite right to focus on the ever-widening AFL/VFL standard.  However his focus is on (his) AFL aligned team and not much concern about the non-aligned teams overall.  His mindset reflects official (though undeclared AFL policy) I think. I'm not sure what the future holds for the non-aligned teams teams in the medium to long term but I wouldn't be 100% certain they'll be around in 5-10 years time sadly.

Yep not looking good for the ex VFA clubs and it is even harder now to be successful with all the interstate teams and being called the VFL is even more of a joke than before!

There are most likely enough ex VFA teams to form their own comp again with a couple of other sides like Noble Park and East Ringwood.

Could it possibly be just one of those seasons where the ex vfa clubs are having a tough time being competitive and that we are reading too much into it ? Or has having no development league and the under 22 rule impacted the competition so much that stand alones will forever be up against it to the point where they will struggle ?

Personally ild like to see stand alone sides compete for 2,3 years and if this pattern continues rightly so people can put their hands up and say its too hard, are we prematurely declaring defeat  after a mere 6 rounds?

I think there are a few issues affecting VFA clubs in our wrongly named comoetition.

It's probably a good thing that State representative football isn't being played any more, because the Big V would be slaughtered by the SANFL or WAFL as the standard of a mature age competition has diminished comparatively.

That’s interesting NorthPort. I was looking online for contact details for the VFL and couldn’t find any. There is also only a VFL hub on the afl one for a website. The fact we don’t have president etc speaks volumes. I didn’t know that! Thanks for the info

What hope have you got of promoting the competition when you"ve smart arses like Hardwick deriding the VFL whenever he gets the opportunity.

Lack of leadership is also a important concern.

Why was the salary cap slashed so drastically for the stand alone clubs when Williamstown football club and Port Melbourne paid close to the maximum without negatively impacting their financials? Port has made a profit last few seasons.

Why is Southport able to put together a significantly stronger stand alone side than the rest ? Job prospects ?? Accommodation? People wanting to live on the coast ?

I think that trying to live up to the salary cap has sent MANY clubs broke !

That might be so but not with the clubs in question therefore hard to understand why Williamstown has had their salary cap slashed and punished when they have shown good economic management. Same could be said for Port and the other ex vfa clubs (in the recent past).