Footscray bow out of VFL Finals MELBOURNE, AUSTRALIA - SEPTEMBER 07: Lin Jong of Footscray is tackled during the VFL Semi Final match between the Footscray Bulldogs and Port Melbourne at Adcon Stadium on September 07, 2019 in Melbourne, Australia. (Photo by Quinn Rooney AFL Photos)

The Footscray Bulldogs’ 2019 VFL campaign has ended, after falling to Port Melbourne by 15 points on Saturday afternoon at Adcon Stadium.

Booting seven behinds in the first term, the ‘Scray got off to a slow start - heading into the main break with one major on the scoreboard.

Fighting back in the final term, the Bulldogs minimised the margin to just 9-points at the beginning of the fourth quarter. However, a comeback wasn’t to be, with Port Melbourne running away with the 15-point victory.

Midfielder Lukas Webb was influential throughout the day, collecting 32 disposals and seven tackles while Lin Jong proved vital for the ‘Scray on his return, collecting 23 disposals, five tackles and booting a much needed goal in the final term.

Developing defender Laitham Vandermeer (24 disposals, six marks) continued to show positive signs throughout the day, while Jackson Trengove’s experience was influential for the young side.

The Footscray Bulldogs ended their 2019 VFL home and away season with 14 wins, four losses and one draw, before failing to secure a win in the finals.

Haven't read the daily rags today Herald Sun and age. Wonder what they will say in their vfl report ?

James motterhead write up in today's Herald Sun is an utter disgrace. It all about Footscray losing and bad kicking. What about ports great win. What do you expect from these clowns.

Its a sad state of affairs when it comes to match reports and info. Thank God we now have social media which allows us to get some info.

Great win by the red and blue or bright pinks yesterday !!! I agree about Khans performance for me he would of been up there with best on ground. I honestly think we have a genuine chance against Richmond and like most other Port fans - ecstatic that we gave gotten this far - a month ago - who would have thought ? Aj - yes the game will be at Port next week as is the other prelim.

VFA - how did the atmosphere compair to the other finals matches you have seen this year ? 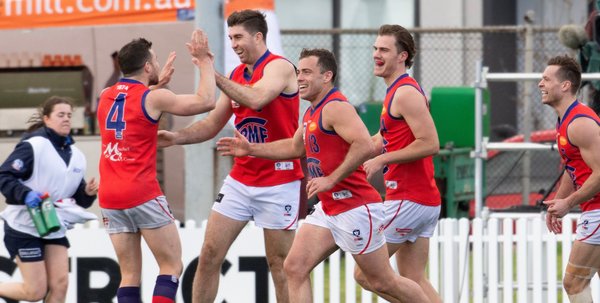 VFL MATCH REPORT: Borough Through to Prelim after another Stirring Win

Port Melbourne are through to a seventh Preliminary Final under the guidance of Gary Ayres after a second successive Finals win to celebrate on Saturday over Footscray at Adcon Stadium.

Despite finishing 7th at the conclusion of the home-and-away season – and subsequently coming up against an opponent who finished 2nd – the Borough held high hopes of riding on the wave of momentum that they generated from defeating Geelong in their Elimination Final.

Dealing with an earlier-than-usual start time of 11:40am, blustery conditions tested the fortitude of both sides in addition to the obvious ‘pressure-cooker’ environment of Finals football.

The Bulldogs won the toss and kicked with the aid of the wind first up, but couldn’t quite nail their opportunities in front of goal early on, which allowed Port to snatch the only two goals of the term at the other end of the ground.

In a game that was always going to be a grind, an early advantage – particularly after kicking against the breeze – would likely prove to be a pivotal key in the game.

It certainly ended up being that way, as the second quarter saw the Borough play some damaging football.

Two goals in quick succession at the halfway mark of the term to Blake Pearson and Jordan Lisle were answered by the Bulldogs a few minutes later, however telling blows were landed just prior to the main break via Matt Arnot from long range; and a successful set shot conversion from the ever-improving Campbell Walker.

It saw the lead extend out to 25 points as the half time siren sounded, and Gary Ayres spent his address to the players in the home rooms of Adcon Stadium preaching the importance of the third quarter to follow.

Despite remaining goalless in the third term, the defensive efforts of the side continued to be of an elite standard.

Whilst many would argue that it was lucky that the Bulldogs’ inaccuracy in front of goal continued (which it was), much of those misses were due to either the Borough’s high pressure on the ball carrier or their ability to force Footscray wide and increase the degree of difficulty on their attempts.

Still with a 15-point lead in their keeping with 30 minutes of football to play, Ayres inspired his troops to remain calm in anticipation of a Bulldogs fightback; and make the most of their own “moments” when they arrived.

A stunning snap on goal by Lisle inside the first 90 seconds of the quarter was the ideal start, but Footscray were not going to die wondering despite kicking against the wind.

Having only scored two goals for the day up until that point, the Bulldogs doubled their tally inside as many minutes to suddenly have the margin back to just 9 points at the 11-minute mark.

Indeed, now was the time to remain composed and an ice-cool boundary line set shot by Shannen Lange a few minutes later would prove to be the decisive blow.

Once again, the healthy Borough crowd in attendance who had braved the testing conditions to line the terraces and cheer their heroes on were rewarded with another memorable Finals victory.

It was somewhat lucky that the club had reached an agreement with Footscray to utilise their ‘home’ rooms of Adcon Stadium as opposed to the away rooms of the previous weekend, as the additional space was seemingly needed to cater for the droves of fans who came in to witness another rousing rendition of ‘It’s a Grand Old Flag’.

Despite being dominated in most statistical areas – including the concession of 23 more inside 50’s – 98 tackles from the Borough said so much for their intent on the day.

Jarryd Blair continued his terrific form to lead the side in that area of the game with 9 tackles, whilst Isaac Conway (9) and co-captain Tom O’Sullivan (8) were similarly tough around the clinches.

On the disposal front, Eli Templeton was once again a familiar name atop the stats sheet with 25, along with O’Sullivan (20) and Mitch Wooffindin (19); the latter a huge reason for setting his side alight early with a dynamic first half.

All in all, as much as celebrations were raucous post-game, focus would quickly return to the next task in the red and blue’s fairy-tale Premiership quest: a date with Richmond in the Preliminary Final, a rivalry which was set aflame when the Borough prevailed in the now-famous 2017 Grand Final.

Since that incredible day, the clubs have only met on two occasions – both at Punt Road Oval – with the Tigers easily accounting for the Borough, but the spirit in which Port Melbourne are playing with right now should hold them in good stead for another bruising encounter.

It promises to be a big build up, with the action to commence at 2:10pm at Adcon Stadium this Saturday afternoon in a standalone contest.

As always, any Port Melbourne supporters wishing to attend are encouraged to avoid prospective queues at the gate by pre-purchasing their tickets, now on sale via the VFL website HERE.