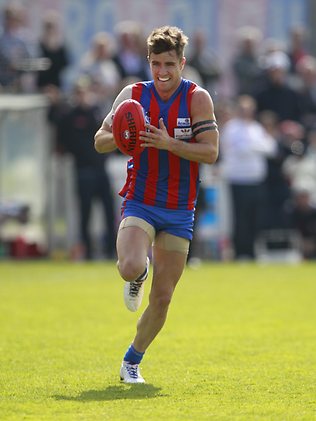 IT was never easy. Williamstown, young and bold, afforded it no peace all afternoon.

But Port Melbourne fought past its great rival to win Saturday's VFL preliminary final at North Port Oval and progress to this Sunday's grand final at Etihad Stadium, where it will vie for a premiership to go with last year's perfect pennant.

The final margin was 34 points, suggesting a degree of comfort.

But a tense coach Gary Ayres and Port supporters could only relax at the 19-minute mark of the final quarter, when Steve Brewer, the man with the kick of a stallion, bombed a goal from outside the 50m arc.

Port could have taken it beyond doubt earlier in the term, but missed three chances. Adrian Bonaddio, playing his 100th game, sprayed two set-shots, but he atoned at the 12-minute mark to push the lead to 26 points. It was always going to be difficult for the Seagulls from there, and Brewer finally put them away.

PORT Melbourne battled through to the VFL preliminary finals with a 22-point qualifying final win over Geelong on Sunday.

The match, played in glorious Spring sunshine at North Port Oval, lived up to expectations as the two highly rated teams put on a brilliant display of football in one of the best games of the season.

Geelong made the better start, kicking the first goal in the opening minute but Port hit back quickly as play oscillated between the two 50m arcs.

The woman behind Port's mean defence

THE 1371 points kicked against Port Melbourne in the VFL's home-and-away season was the fewest in the competition.

And much of the credit for that miserly defence goes to assistant coach Peta Searle.

When she came on board late last year, beating male applicants for the role, she entered uncharted territory - no woman had ever coached at VFL level before.

Not that Searle has been too concerned with that feat.

"Coaching at any level is a

challenge," she says. "At the end of the day football is football, no matter where you're at."

VETERAN Port Melbourne skipper John Baird will be the backbone to its finals campaign against Geelong in a qualifying final today, then tomorrow night he is favoured to take out the prestigious J.J. Liston Trophy for the VFL's best and fairest.

If Baird wins the coveted award, he may have to fend off teammate Shane Valenti in the count; a proven vote getter who is a solid chance to create history for his third consecutive Liston after yet another consistent season.

The 2009 Liston winner, North Ballarat's Myles Sewell, is also tipped to finish high in the pecking order after a top season at the Roosters, lifting his name back into calculations for another shot at the AFL draft.

Advertisement Rarely does a footballer in the twilight of his career - in which he played 46 games at North Melbourne - dominate in such a way that Baird has this season.

IT had been a grind for Port Melbourne in previous weeks. On Saturday it was a gallop.

Led by another best-afield performance from John Baird, the Borough gave a splendid performance to defeat a Bendigo Gold team replete with Essendon players by 53 points at North Port Oval.

Only two goals split the sides at half-time, but the Borough kicked clear in the third quarter and in the end won comfortably, their most impressive effort for weeks.