From the Frankston Standard Leader - www.localfooty.com

The Dolphins have done it!

Frankston on Sunday claimed its first win in the VFL in more than a year and its first under coach Danny Ryan when, sparked by small forwards Corey Rich and Yilber “Bella’’ Zijai, it defeated North Melbourne at SkyBus Stadium.

'No club should go under': the battle to save the Frankston Dolphins 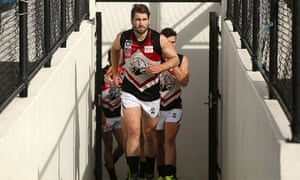 Hardy Melbourne football fans arriving at Frankston Dolphins VFL games from the bayside end of Frankston Park are confronted by a set of towering, ornamental gates, which sit between two imposing stonework pillars. In their first life, these unusual decorative flourishes stood at the front the Old Melbourne Gaol. Now, owing to the various crises of the football club to whom they belong, they’re the only prison gates in Melbourne not greeting regular arrivals.
The 2017 VFL season – which kicks off on Saturday with a clash between Gary Ayres’ Port Melbourne and the Carlton-affiliated Northern Blues – will for the first time since 1966 not feature a side from Frankston. Last year the competition battlers’ licence was revoked by AFL Victoria as debts of a reported $1.5m threatened to sink the club without trace.
For years Frankston had been the league’s last true holdouts of the rough and tumble VFA era – a standalone club who refused to cosy up to a big-spending AFL equivalent. Every other team in Victoria’s second-tier league is, or at some point has been, aligned to an AFL side and been bolstered by unselected league players each weekend. If you played for Frankston, you played for Frankston alone. The club’s motto: “Stand strong, stand tall... Proud to stand alone.”
There was a time when such stubborn resistance set the club’s players and hardcore fans apart from the rest but last year, upon the 50th anniversary of the Dolphins’ first VFA/VFL appearance, only 200 supporters paid the $50 yearly membership fee. Now, those who did cough up have an eerily silent winter ahead and no team to cheer on. A club founded in 1877 and a mainstay of high level football for the last half-century has in the last six months been brought to the brink of extinction.
The full scale of the crisis was confirmed on 30 September last year, when AFL Victoria used AFL grand final week to bury the official statement that the Dolphins would not be given a licence to play in 2017. Two former Frankston stars would play in an AFL premiership a few days later – coached by another ex-Dolphin, Luke Beveridge – but that triumph was bittersweet for Frankston supporters as they confronted the heartbreaking expulsion of their side.

FRANKSTON has until June 30 to convince AFL Victoria it should be readmitted to the VFL in 2018.

And the Dolphins have set themselves to sign 1000 members — a league best — in the next three months to prove their community support.

The club says its ability to boost membership is a key point that AFL Victoria will consider as it weighs up Frankston’s bid to regain its VFL licence.

The Dolphins went into administration before the last match of the 2016 season with debts of more than $1.5 million.

Troubled Frankston Dolphins has 90 per cent of debt slashed

FRANKSTON Dolphins Football Club has received a massive boost with the State Government waiving a huge chunk of its debt.

State Labor MP Paul Edbrooke announced today that 90 per cent of the debt owed to the government had been waived following tough negotiations.

Mr Edbrooke would not reveal the figure, however, the Leader understands it is about $450,000.

“I made it clear losing the Dolphins was not an option,” Mr Edbrooke said.

“After weeks of negotiations I have secured an agreement with the State Government — one of the Dolphins’ largest creditors — which waives more than 90 per cent of the club’s debt to the government.

“This puts the club in a remarkably better position to move forward and reclaim a VFL licence.”

And council has also stepped in — relinquishing $50,000 owed by the Dolphins.

Council CEO Dennis Hovenden said any further reduction of the remaining $18,000 owed would be at the discretion of the newly-elected council.

But Mr Hovenden said it was vital that “major changes” occurred within the club so it could gain a VFL licence for 2018 — the major aim of supporters.

“The mood of the meeting was reasonably positive. There was only one creditor against the proposal,” he said.

Dolphins great and steering committee member Peter Geddes said supporters were delighted they could now focus on regaining the club’s licence so it could re-enter the VFL in 2018.

Mr Geddes thanked Worrells and Frankston Council for their support in getting agreement on the deal from creditors.